Harold's Cafe (previously Daphne's, The Hungry Bite, The Holy Roll, The Coffee Shop, The General Store and Harold's Store) is a shop/cafe at The Lassiters Complex. The shop was originally in a nearby street but relocated to Lassiters in May 1986.

The original Coffee Shop (named The Coffee Spot) was located in an unnamed street and owned by Wally Walters who wound up selling the place to Harry Henderson after he won against him in a poker game, Harry later sold it to his granddaughter Daphne Clarke who owned the place until Paul Robinson purchased the site in early 1986.

Daphne Lawrence ran the coffee shop called Daphne's by early 1986. It was the local coffee shop for the residents of the street she lived in, Ramsay Street and surrounds.

Owners over the years

Staff over the years 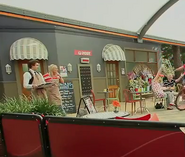 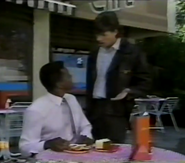 Mike and Pete outside the coffee shop in February 1988.

Original Coffee Shop site in 1985.
Add a photo to this gallery
Retrieved from "https://neighbours-soap-opera.fandom.com/wiki/Harold%27s_Cafe,_Lassiters?oldid=219596"
Community content is available under CC-BY-SA unless otherwise noted.